Star Wars: The Battle of Yavin 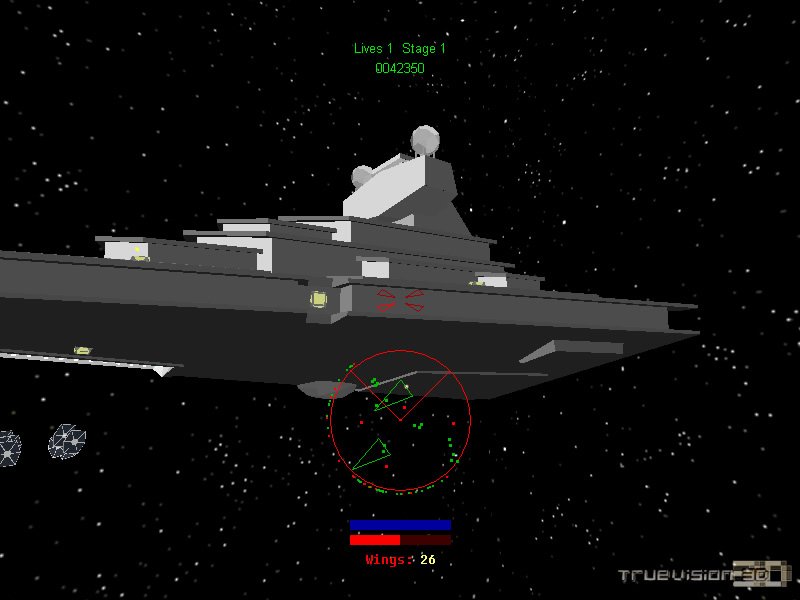 “3D Shooter Game. Play as Luke Skywalker in the epic battle of Yavin, assault and detroy the empire's Death Star. Fight in space, on the Death Star's surface, make the trench run, and try not to get blasted by Darth Vader's ship.” - Bruno R. Marcos
Review by Game Hippo:
“Star Wars: Battle of Yavin is a game based on the final battle in Star Wars: A New Hope, which just happens to be the final Star Warsbattle too. You take control of Luke Skywalker and blow up TIE Fighters and battlecruisers until you reach the Death Star, which also must be destroyed. As such, theres your story. Unlike the movies theres no epic twists or story telling, SW:BoY is all about shooting stuff. Taking place in a first person view, you fly around in your X-Wing, with your wingmen flying around you, who display some decent A.I, and are a crack shot with the lasers too. You are immediately flung into a melee with a cruiser, which constantly spits out squadrons of TIE fighters, which naturally must be dealt with in a swift, harsh and violent manner. Here however lies the crunch. While having a huge space-based aerial war may be well and good, it sometimes seems that your more of a viewer then an actual participant. Enemy fighters tend to flock around in groups of about three, and generally seem to favour going after your team-mates, letting you go pretty much open-season on them without much fear of retaliation. In-fact the cruisers are the only enemy that seems to actively hunt you. But then again, I was the only one ever attacking them. Seriously though, the enemy are either blind, or just totally heartless. Attacking a squad and blowing up two, the remainder didn't even react. Nor do they seem to notice you, most of the times I died was from bumbling TIEs smashing into me. Fortunately, enemy turrets and cruisers are far more aggressive, and provide a good challenge. Adding to the injury list, the gameplay is incredibly slow. If my memory serves me correctly Star Wars ships always went at it at high speeds. Here it feels as if your flying through a fast pool of invisible molasses. While you're probably attributing it to low-FPS, it wasn't laggy-slow, it was just slow-slow. It's even more annoying that your ship handles extremely well, you can turn and dodge with ease, but trying to get anywhere fast is a hassle. Thankfully the play-arenas are small and tight, so your curiously slow ship shouldn't be too much of a problem.“

Download Star Wars: The Battle of Yavin for free

The Star Wars by Bruneras series

The Empire Strikes Back
shooter