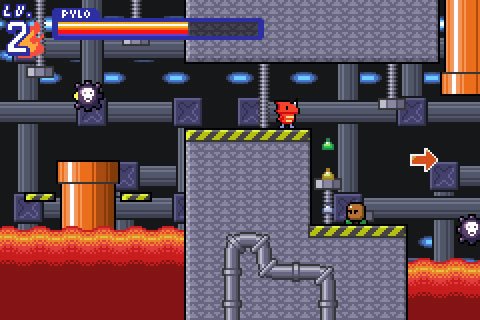 “Pylo is a Draconian, one of a race who can breathe fire and make their home in the forest. But when strange soldiers appear and Pylo’s father, the Sage Falo, is rendered unable to fight back, Pylo is sent to investigate. Upgrade Pylo’s fire attack as you travel through each level and help him defeat the numerous bosses who are out to stop him! Unleash powerful elemental attacks by spending gem shards! Find the secret treasures in certain levels and unlock new abilities! World 1 and World 2 are available at this time, and the rar file comes with the Manual and the OST, which includes many original songs by Patt Ytto.” - Grit
Review by Freeware Database:
“Pylo Noveau is a 2D platformer made with the Game Maker engine, featuring four lengthy levels to play in the first demo build released. The developer has promised four times the content in the final version, but don't let the incomplete tag discourage you from giving this game a try. You play as Pylo, a dragon with fire-breathing ability that can be further upgraded whenever you collect a red gem. Any jewels you collect also allows you to use special powers that can either reveal secrets in a stage, heal Pylo, or even hurt enemies in a myriad of ways.“