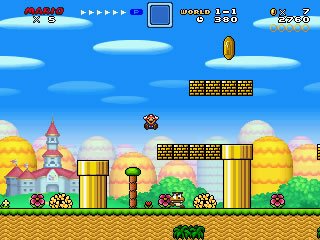 “Made for Windows. Less stable in Windows 8 due to sound issues. Can run in Ubuntu with Wine (probably other OSes), but has minor issues and requires dmusic and dsound installed with Winetricks.” - SMFR Team
Super Mario Fusion Revival key features:

Super Mario Fusion Revival is a remake of an older game. Here's some details about the original game:

A Game with a Kitty 7: Sky Crashers
platformer