RPG / roguelike
full free version (?)
ADOM: Ancient Domains of Mystery is a RPG game released in 1994 designed and developed by Thomas Biskup. ADOM: Ancient Domains of Mystery can be described as a full free version game and can be played on the following operating systems: Windows, Mac OSX, Linux, DOS, Free BSD, Amiga.
Free Games Utopia is made possible by displaying online advertisements to visitors.
Please consider supporting us by disabling your ad blocker. 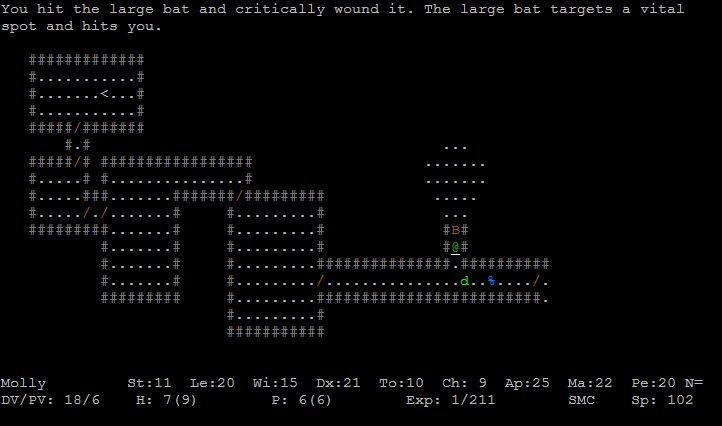 “ADOM (Ancient Domains Of Mystery) is one of the most successful roguelike games ever created, with downloads in the millions and many more every day. ADOM was the first roguelike to add a true role-playing experience to the roguelike genre, and boasts a brilliant mix of story, RPG, exploration, and intensely strategic and flexible combat.” - Thomas Biskup
Review by Game Hippo:
“

Ancient Domains of Mystery, ADOM for short, is a roguelike game with a vast outside world and dozens of different dungeons. The Drakalor Chain is being threatened by the forces of chaos. The player must venture into the depths of the dungeons and close the chaos gate. On his way, chaos slowly start corrupting him, giving him various mutations, which can be both beneficial, harmful or both.

With 10 races, ranging from humans to dark elves to drakelings, and 20 professions, ranging from fighters to weaponsmiths to elementalists to mindcrafters, ADOM is easily one of the roguelikes with the most variety in player character choices. Each of the races and classes have their own unique features. Where ADOM really shines is replayability: all of the dungeons are completely randomly generated, making every game unique.

However, as most roguelike games, ADOM is definitely not for everyone. First of all, the whole interface is based on ASCII characters. This is a mixed blessing: it means you won't get any pretty graphics, but you'll be able to identify what's on the screen quickly and easily. Secondly, the large amount of possible commands may seem overwhelming at first, but of these dozens of commands, only a few are used constantly, so learning them should be not too hard. Also, ADOM can be very difficult in the beginning, until you've managed to learn a few basic tactics. Don't let that discourage you, the game is very enjoyable once you are comfortable with the interface and learned to survive in the beginning.